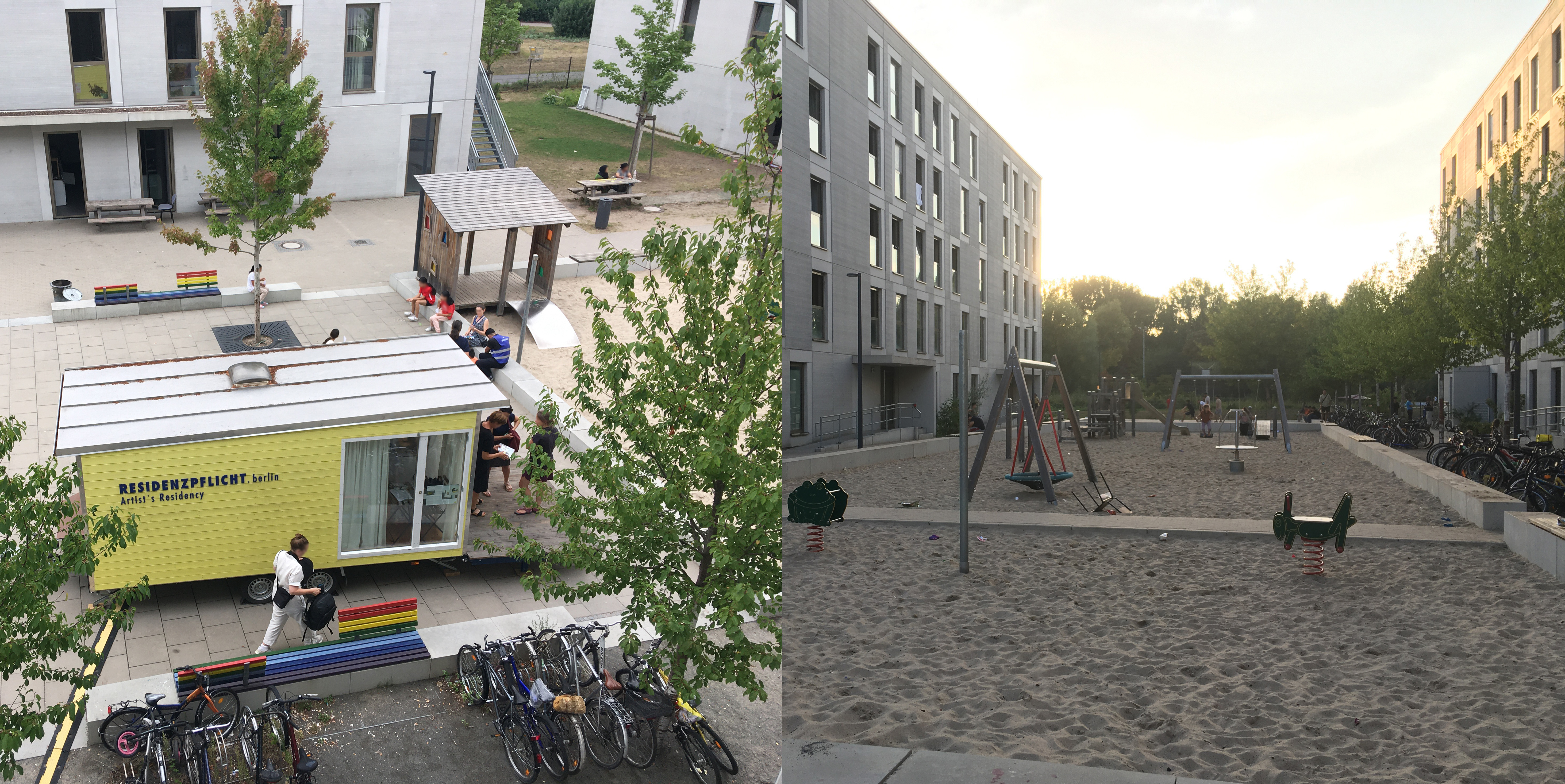 What an incredible welcome I’ve gotten, and I am very happy to be here. Both the staff and the residents have been so warm and welcoming. The days have just flown by and have been filled with many good talks and encounters, and I have even been offered and given dinner 4 times (!).

I have been spending most of my days on the porch of my little yellow home, where I’ve built myself a little parasol to shield from the laser sun. From it I observe the area and draw, write and talk to the residents.

The language barrier is the only problem I’ve encountered so far, and most residents (all children and a lot of the older) speaks fluent German, but quite rarely English, and sadly my German is not much more than a few words..

So here is a little sweet and embarrassing story from some of my language struggles a few days ago:

One of the English speaking Afghan boys came up to me and told me his mother asked him to ask me if I would like some rice in an hour or so, which I told him I would love to.

An hour later the boy came with a big mountain of beautiful looking and arranged orange rice that was mixed with carrots and spices, with a separate salad, which tasted amazing. So sweet! After I had finished eating, an Afghan woman came out through the same entrance with another younger boy, and started walking toward me without looking too much in my direction, I was thinking it might be the woman who cooked me the lovely dinner and hoped to be able to thank her, but when she came to around 15 meters from me, she made a turn and walked over the playground and walked back on the other side. But on the other side she met the boy who had asked me earlier, and told him to check in on me, so he came up and asked me if I was done eating or wanted another portion. I told him I was super full and couldn’t get anything more in, and also told him to thank his mother so much from me, and that it had been amazing meal. When the boy left I could not see the woman anymore, and I of course would have liked to at least thank her from a distance.

Maybe 45 minutes later a woman, the same size, with a similar beautiful looking head scarf, comes out and walks slowly towards me. I am wondering if it’s her and if I’ll get my chance to thank her. She passes the path where the first woman had turned and crossed the play ground, and she comes all the way up to me and while passing, she looks at me, smiling, saying a quiet/shy hallo as she passes. I greet her back as she continues on the way to leave some kitchen trash at the containers. On her way back she passes me again, and because it has been much rarer for woman in the housing to greet and talk to me, and because of the possibility of missing my chance to thank her, I try to ask her if she is the one who gave me the lovely meal as she walks by. She stops, but does not understand my English. I try again, then in my three-word German with lots of body language… She looks confused at me, and asks me in German if I am hungry? I try to explain that I’m full, mimicking a full stomach, and after a few more tries to communicate from both of us, I try to say that it does not matter and I wish her a good evening, and she leaves. 2 minutes later her daughter comes out asking me in half English half German what I want, and I try to explain what had happened and what I had tried to ask and say to her mother. She nods, aha, ok, and runs back in again. 10 minutes later she comes out again with two flatbread sandwiches wrapped in tinfoil! I try once again to explain, while the girl looks a bit half annoyed at me, having to run all this errands and act as interpreter to this apparently confused man. I can see that my explanations don’t go anywhere so I bring out my phone and start typing this by now, quite complex story, into google translate, and the girl waits restlessly for my slow and stressed typing.. I just manage to write two clumsy sentences, trying to explain that another woman had given me food without me knowing who it was, and I had tried to ask her mother if it was her… The mother of the girl has also come out now and stands waiting for my mobile typing. The girls reads it in German nods again, saying uhu, ok, even though I had not even come close to explaining the whole story. She says something to her mother, and I try to give the rolls back, but they tell me to keep them. If not now, then for later.. I thank her and try to say sorry for the misunderstanding, but it just creates more confusion because she does not understand what I am trying to say. I then just thank her in German and wish her a good evening, after wishing me the same she goes back in. Sadly there was no laughing, none of them seemed to really have gotten what just happened, so I am a bit left with feeling/looking that I’ve have asked her for food, saying I was hungry… Pointing at my belly..

Very embarrassing, but at the same time such a warm and nice experience, so I try to just enjoy the embarrassment, which is kind of a beautiful and sweet emotion if you let it be that.